I've had a pretty productive couple of weeks.  Several weeks ago I had the privileged of winning the latest pattern by Christina Cameli of A Few Scraps,   Magic Carpet. 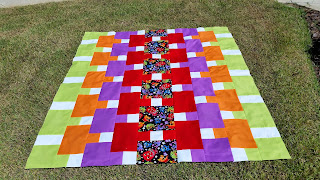 It is a stunning modern quilt which I had to make almost as soon as I received it. Chritinas quilt was done all in solids. My version has a great monster novelty fabric down the middle instead of another solid. I also modified her version by dropping the last column on either end and one row in the middle. 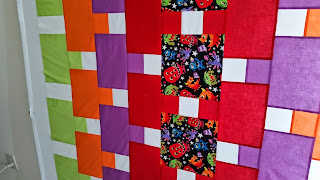 Her pattern finishes at 69 x 75 which was a wee bit to large for the child's version I was making.  Mine came in at  57 x 62.  The pattern was clear and easy to follow. It included  a grid where you could note or clip your fabric choices for a quick reference as well as a coloring page where you could try out your color choices. 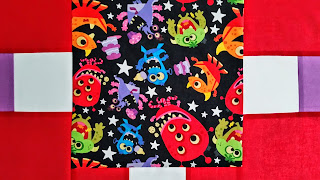 Thank you so much Christina, I am sure I will make this pattern again.

Next up are these neat little bags on ribbons.  My guild makes them for woman to use after breast cancer surgery. They are to hold the drainage tubes and keep them out of the way. We make them and donate them to local oncology units at area hospitals.  They are quick and easy to make. I believe they averaged about 10 minutes each to put together.  They might go a bit quicker but I did french seams because I don't have a surger. Actually it took me longer to attach the ribbons then to make the little pouch. 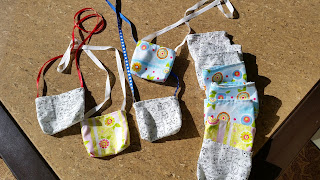 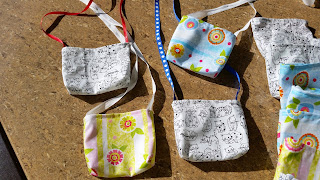 I also managed a couple of place mats for the guild which I forgot to take photos of.  I believe the guild gives them to members who are in need of cheering up. I'm rather new to the guild so I'm a little fuzzy on the details.

Last but not Least is my 3rd quilt for the Hands 2 Hands Challenge 2015. See the button to the right. This pattern was showcased on Mother's Day over at Confessions of a Fabric Addict 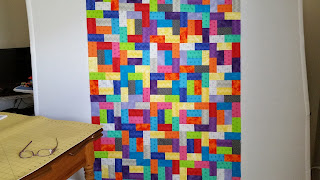 The tutorial was by Joanne  It is a really quick and easy quilt and her tutorial was spot on. I did it using 2 1/2 inch strips.  I used a Jelly Roll which contained 20 strips that I got on special at my local JoAnns plus a few additional from my stash. 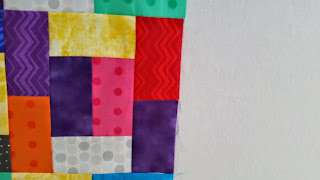 This is the block the quilt is made up of.  A great chain piecing event. I finished the top in a weekend.