What happens to a quilter who gets cocky?????  She spends a lot of time ripping. How do I know this you may ask.

The 9 patch portion of the block was pretty simple.  I hacked up 60 charm squares that spanned the past decade ( we all have charms left from the millennium don't we ). Since I pulled primarily fall looking colors I used creams for the background.  Now is the part where I got cocky.  Two of the edges of the 9 patch get sashed with a cream strip and the triangle for the pinwheel.  I cut all of the strips and then auditioned fabric for the pinwheels, thankfully I only cut enough for 8 blocks to start because I put half of the triangles in at the wrong angle. Of course I didn't catch that until I had trimmed the cream off the back of the triangle. Can you say scrap bag?

Next I took the 48 small blocks with the corrected sashing and whipped them into 12 large blocks.  Merrily I sewed along in ignorance putting the 12 together upside down or backward.  RIP

I have no idea what was wrong with my brain this weekend because the insanity just went on and on. Next I put 2 of the 4 rows together wrong.  RIP

All I have left to do now is the outside edge of sashing to complete the pinwheels.  That part not only has seen ripping but parts have seen the trash and parts have seen the scrap bin.  I so badly wanted it done today but common sense finally won out and I have given in and accepted the fact that I was going to do some real damage to something if I didn't give myself a time out.

I hope I have learned the valuable lesson on not being so cocky.  Maybe by week end or next week even, I will have a picture of the quilt top with all of the triangles going in the correct directions.

My sister dropped in, in the middle of this afternoons tirade and has put dibs on this quilt. That means I not only need to finish the outside edge I need to quilt it.  It is probably the incentive I needed to calm down and think positively about finishing it instead of dumping it in a box.  All in all this "simple" quilt has been a humbling experience.

I linked up to quiltstory - Tuesday - with Tink's quilt
Posted by tink's mom at 6:37 PM No comments:

On Thursday I bought a new Spring/Summer bed spread in a lovely shade of green.  Very pretty, very simple.  It took all of 3 hours before I found Tink on it all comfy cozy chewing on a rawhide making a puddle the size of her head with slobber. 80 pound dog, big head.

I tried a bath towel and a beach towel.  Both of which she used for her body but somehow missed with the rawhide chew.  My quilters brain said that a throw size quilt would work if I had one handy.  Since it is destined to be abused, not a complicated quilt or one I spent money on to have quilted professionally.  So, are you sitting down, I went into my UFO box.  There I found this: 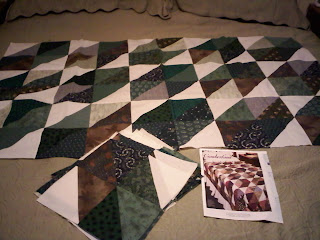 Half a top, with the remaining blocks, with the pattern and fabric for backing all in shades of green. I worked on finishing the top Saturday afternoon.  Saturday evening I thought I could get it sandwiched but found that the piece I had for the back was too small.  Found another piece in the stash, bigger but not big enough. So for the very first time I pieced a back.  I went through my stash and scraps and found that I still had several pieces of fabric that the blocks were made from. 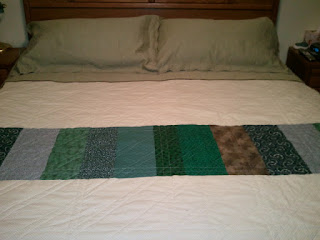 Saturday night I finished the back. Sunday morning I sandwiched and Sunday afternoon, around a visit with my mom and dinner, I quilted it.  I even experimented with binding it totally by machine.  It’s the perfect size and her majesty took it over immediately. 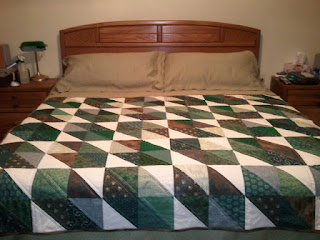 So back to the other 2 tops I was working on last week before they go from WIP to UFO.

yesterday I found my way to this great blog http://blueelephantstitches.blogspot.com/  and found this great little quilt.  I thought it would be a nice little project to work on when I realized I actually had some of the HST done for another Wonky star (bonnie hunt) quilt.  Ok once I pulled them out I decided on a different backround and pulled out the chopped off triangles drawer and set to work. 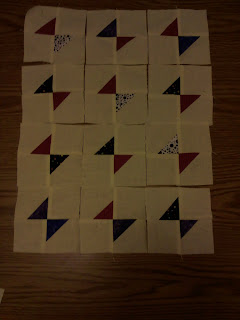 Had an all around great day.  Spent some quality time with my mom, sister and my sister's family in between some real great quilt projects.
Several weeks ago I saw ticker tape projects on several blogs and thought I might like to try it.  Then i saw some raw edge applique and thought I might try that, also or instead of, depending on the project.  Further thought and I realized neither was something I wanted to do a whole quilts worth and the idea morphed into maybe something on a tee shirt for the summer in maybe red, white and blue. 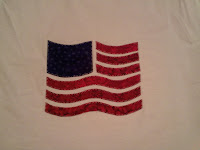 Last weekend I was sorting through my hangings for the front door and came across the country flag I came up with several years ago for a guild block of the month.  The timing was just too good and I knew I wanted it on my tee shirt. 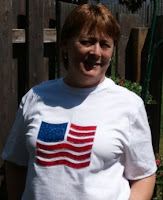 So now I have a fusible, blanket stitched, appliqued flag on a tee shirt for the summer.  While I was at it I whipped one up for a friend who I will be seeing in a couple of weeks.  I guess that means that the ticker tape and     raw edge will need to stew awhile longer for an outlet of their own.
All in all a very Happy Mothers Day.
Posted by tink's mom at 8:12 PM 3 comments: 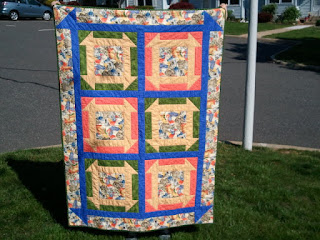 I did it. I finished the Baby's quilt yesterday and gave it to the new parents this morning. Great feeling all the way around. It was a Mother's day thing.

The fabric is sort of watercolor animals of all sorts, a great baby boy fabric.  It was gifted to me from a friends stash.  All of the rest of the fabrics were from my stash.  The backing is just a boring plain yellow.  Since I mostly did in the ditch quilting the quilting looks great on the back. I do need to start thinking about creating backs with personality. One of these days.

Photo's of a couple of April's finished tops - Part 2 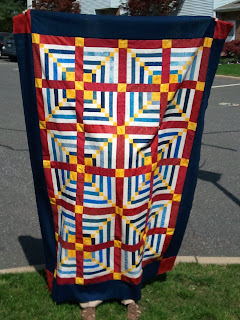 This top was started in January.  All I had left to do was add the outside border. It took less than 2 hours.

I based this top on  a picture I found in junk mail that came wanting me to subscribe to a quilting magazine. In an effort to show how detailed the instructions would be it gave the block info.

I'm happy to say that this quilt and the one pictured in Part 1 were both made entirely from the stash and scrap bag.  Great feeling of accomplishment.

I had planned on working on another WIP started earlier this year but the photographer reminded me that at least 2 years ago I started a wall hanging for him that had yet to get to the wall stage.  It's another piece where the hard stuff is done all I need to do is sash and border the 4 four squares.  Maybe I can bump it up to the top of the list.  I think I even know where all of the parts are located.

Til next time.  me 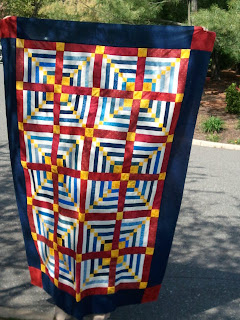 Photo's of a couple of April's finished tops - Part 1

I finally got the tops and a photographer together at the same time and place.  I tried doing this on my own with the help of the back fence but it really wasn't a good idea. 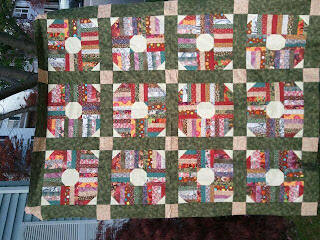 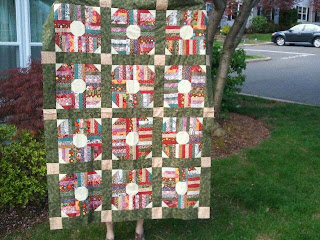 This is the top I finished last week.  I worked on this one pretty much from start to finish.  That doesn't happen often.  Usually another idea pops into my head midway through a project and the WIP gets set by the wayside.

My favorite part of the picture is that my quilt has little feet.
Posted by tink's mom at 1:21 PM 1 comment: