How Old is your Oldest UFO - and a Giveaway 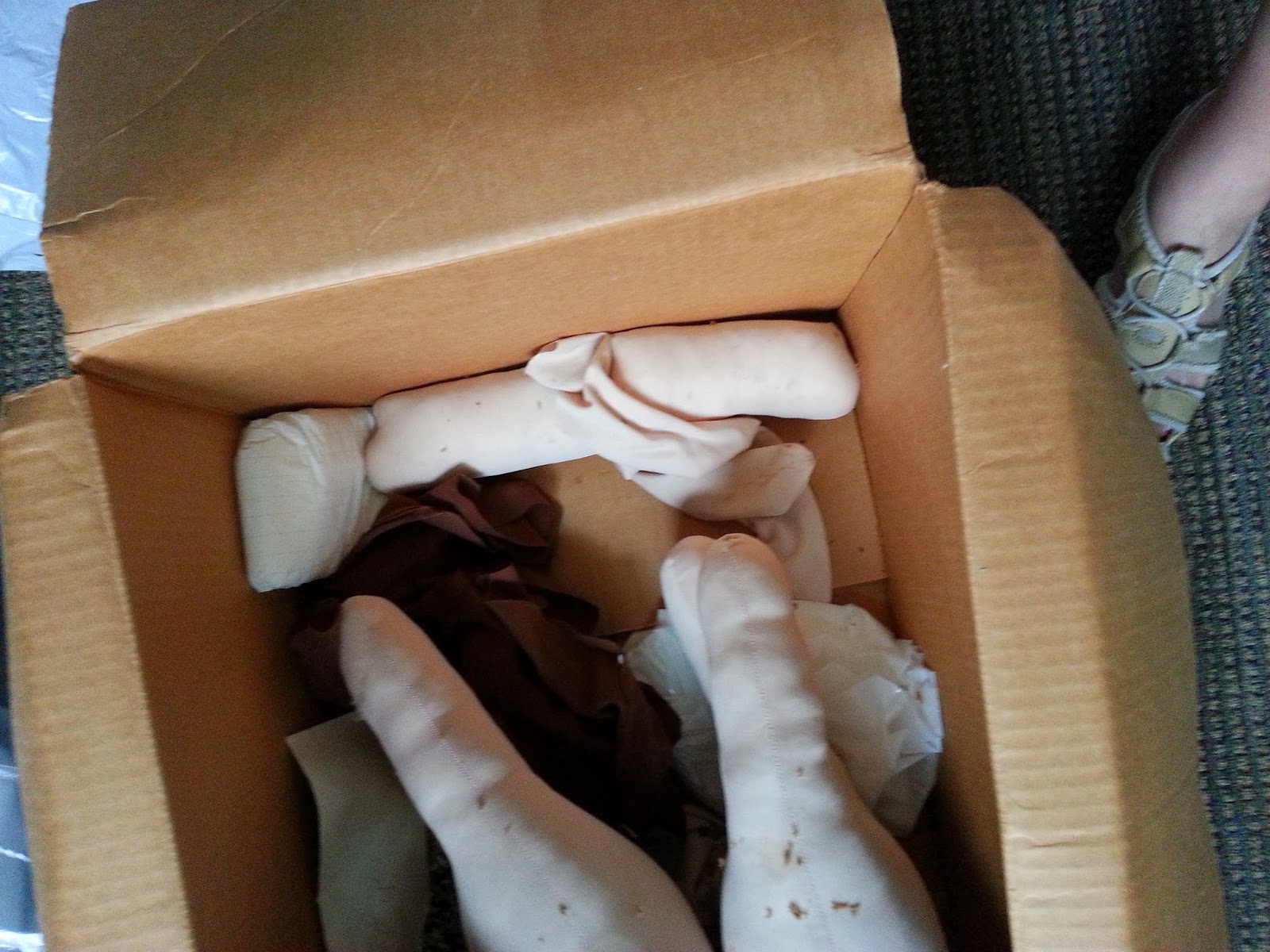 Anyone who has dropped by in the last couple of months has gotten the message that we are cleaning up and out our townhouse preparing for the next step in our lives.

We’re not in a hurry but as a project arises, painting, carpeting etc. etc.  we take the opportunity to clean out a little more.  We had the house painted the second week of July and carpeted the 3rd week.

It poured the day they laid the carpet.  As they were laying it under my bedroom window the carpeter announced that water was leaking in making quite the mess of the new paint around the window.

People are coming on Friday to assess the problem which is most likely the roof.  We are taking this opportunity to clear out the minimal amount of stuff we have stored in the attic.  Behind the 9 bins of Christmas miscellany there were several dusty old cardboard boxes of craft type stuff.

Mostly smelly. Temperature extreme’s really bring out the worst odor in all things with a petroleum base.  A bag of wonderful yarn looked to have been a nest for something along the way.  A box marked misc. craft pieces  that didn’t go together and on and on.  I roughly went through each box and found little worth salvaging.  A Needle here a scissor there and then I found the box marked doll parts. 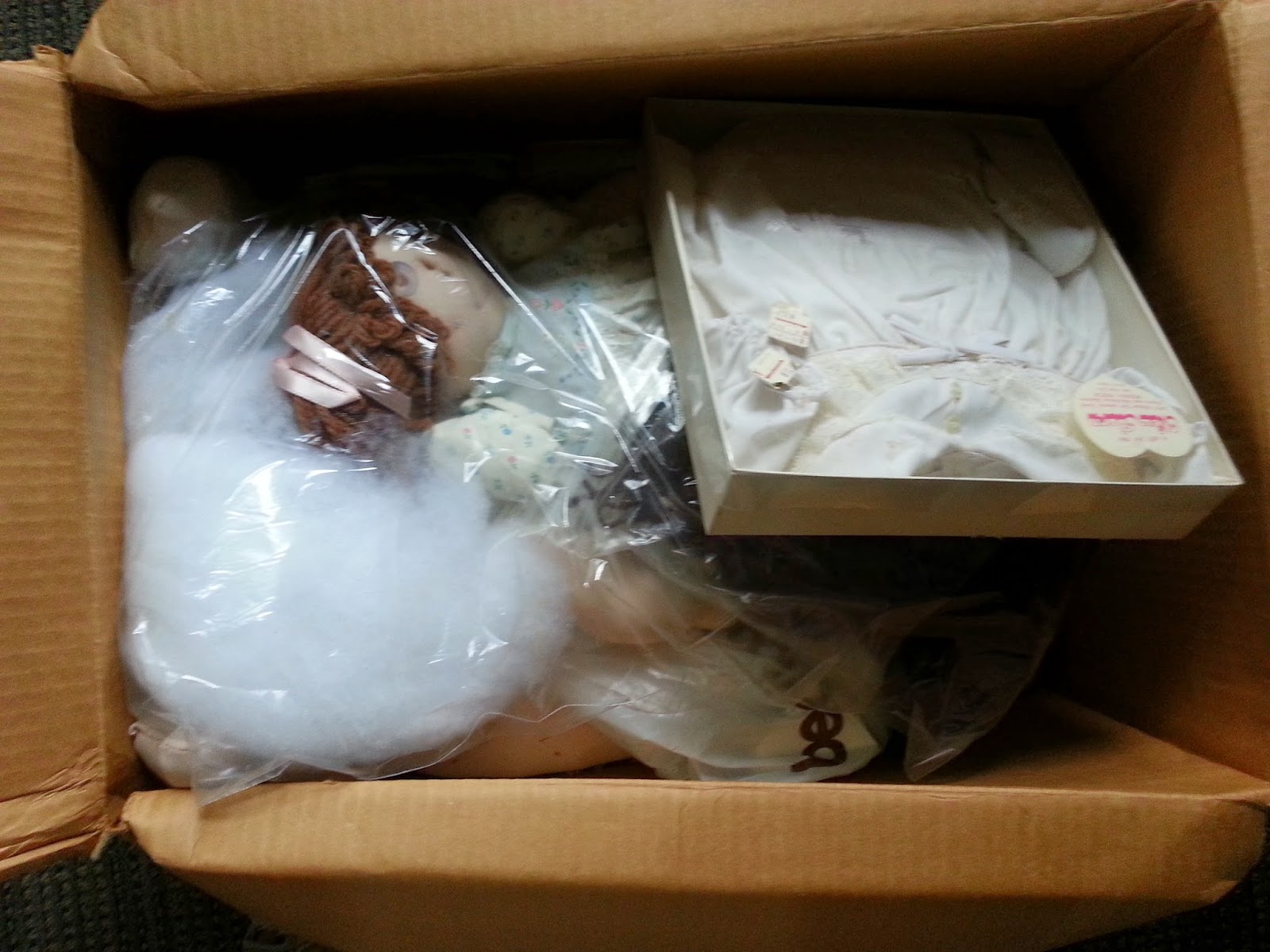 This is my oldest box of UFO’s.  I started and finished making cabbage patch type dolls back in the 80’s.  The box didn't have any holes in it or any bite marks or chewed corners. 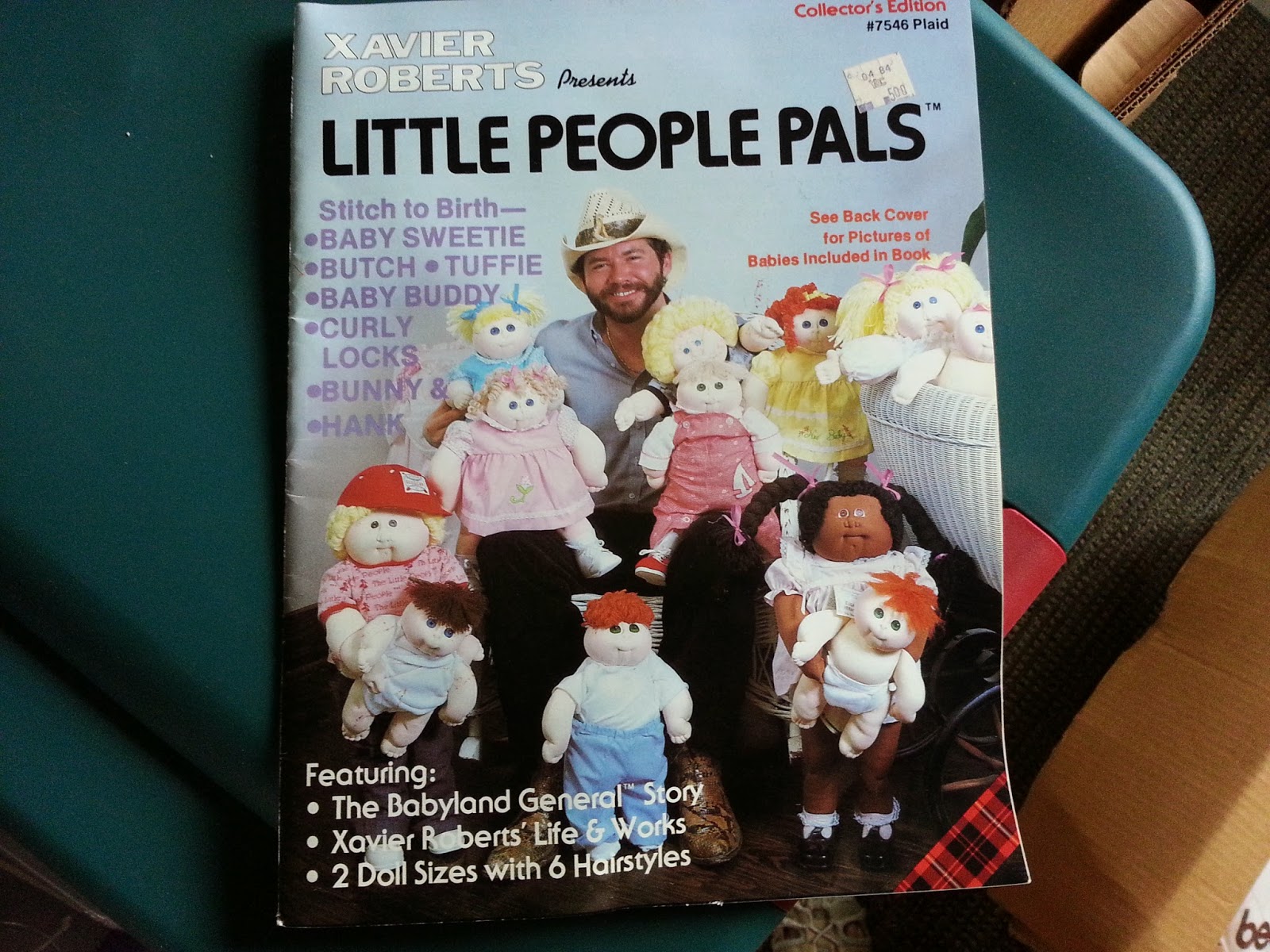 I’ve never been one to make 1 of anything. When I started doing this particular project I had 3 nieces so from the get go I needed to plan for at least 3.  Then of course I had people wanting me to make them for their kids. For some reason I have it in the back of my head that my girlfriend and cohort in this type of thing and I made around 25 of these beings. 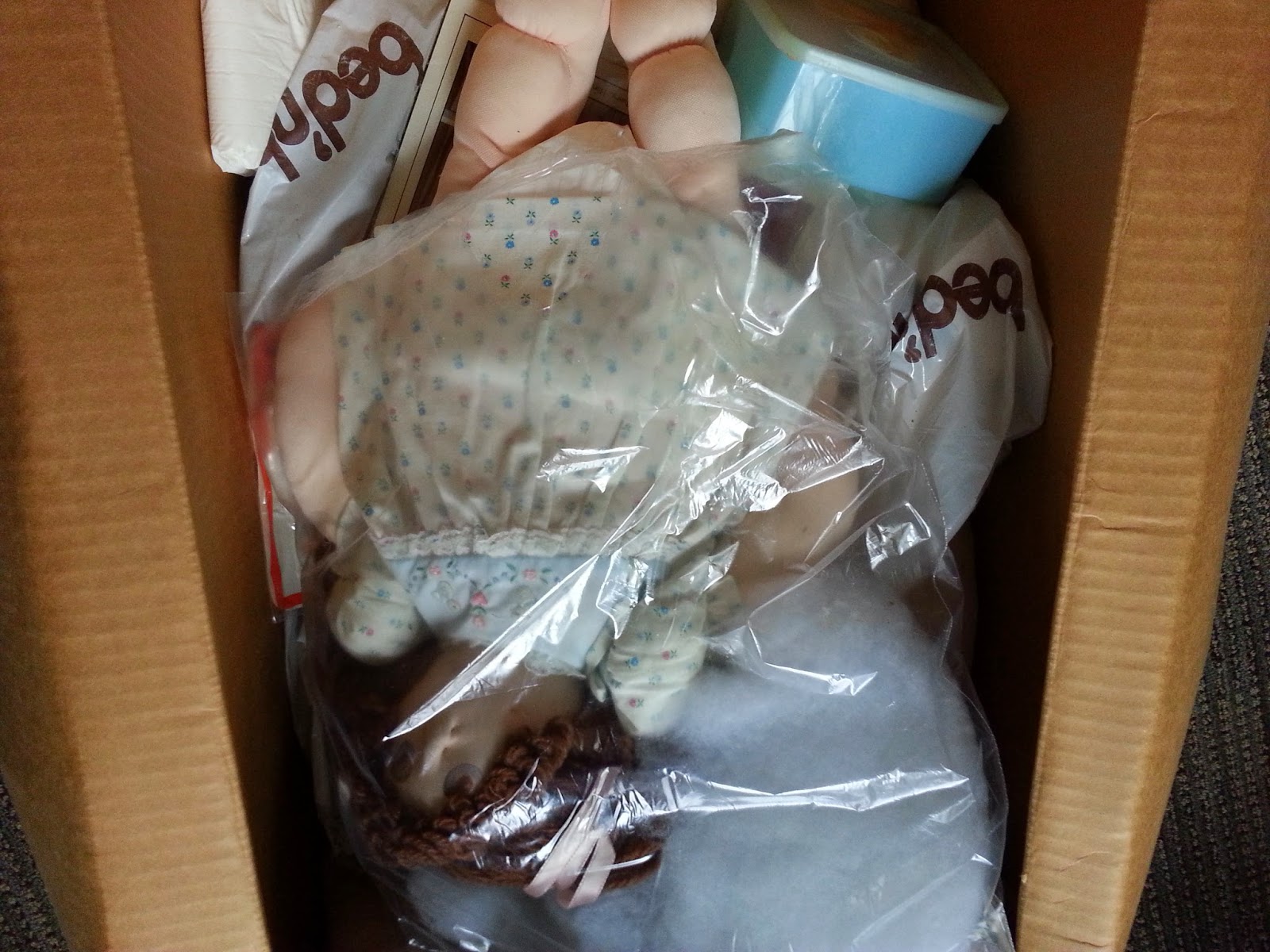 The box didn't have any holes in it or any bite marks or chewed corners.The box contained one finished doll, some clothes, various legs and arms and........

what looks suspiciously like sun flower seed remains.  Nothing in the box was chewed on or nested in just this little mound of left over shell pieces. 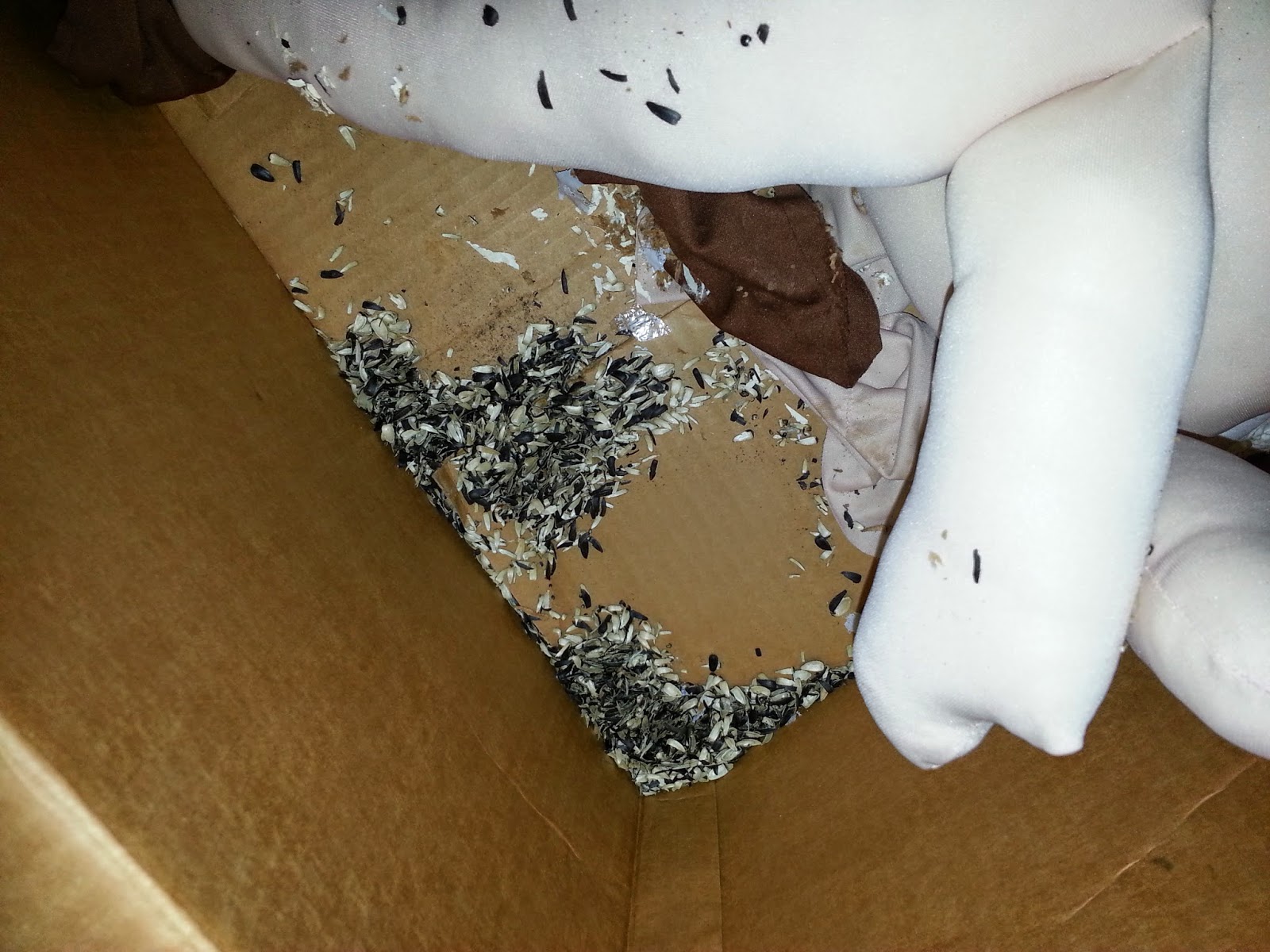 So this becomes my oldest UFO.  I know I moved into my house in 1986 and I had been working on them way before that maybe 84.  That would make this a 30 year old UFO sighting.

I do think I'll dump the rest of the box but I can't toss this cutie. 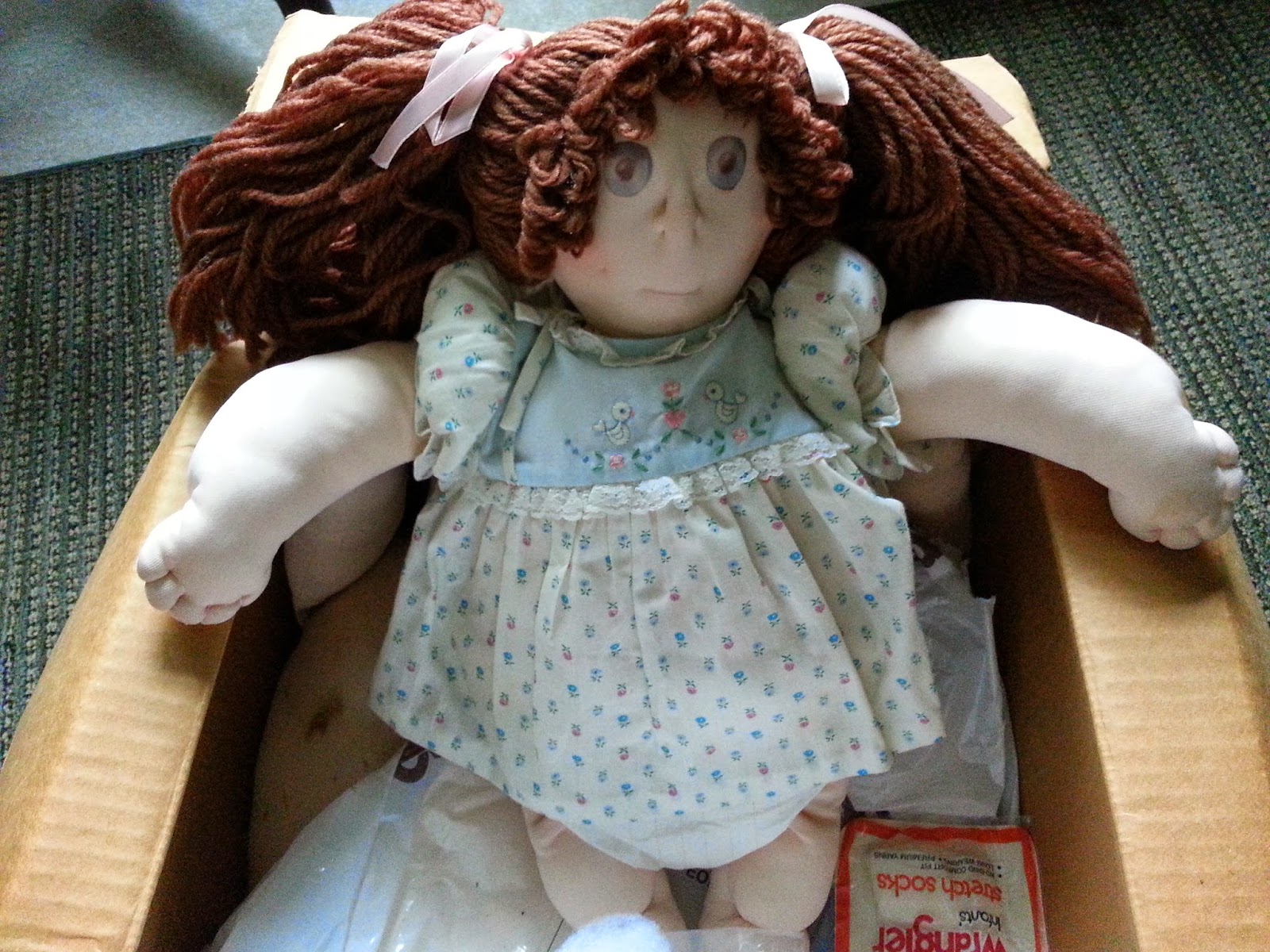 On to my giveaway.  In cleaning up I found I had an unbelievable collection of charm packs.   I think I will pick one winner from the people who leave a comment on this post.   The winner will receive 2 charm packs. I’ll ship anywhere  in the world.  I’ll pick the winner   Monday evening, July 28.  You don’t have to tell me how old your oldest UFO is to win but I am really curious to know.