This is just about the last of Christmas 2014.  I am in fact done but won't have the last of the photos posted until later this week. 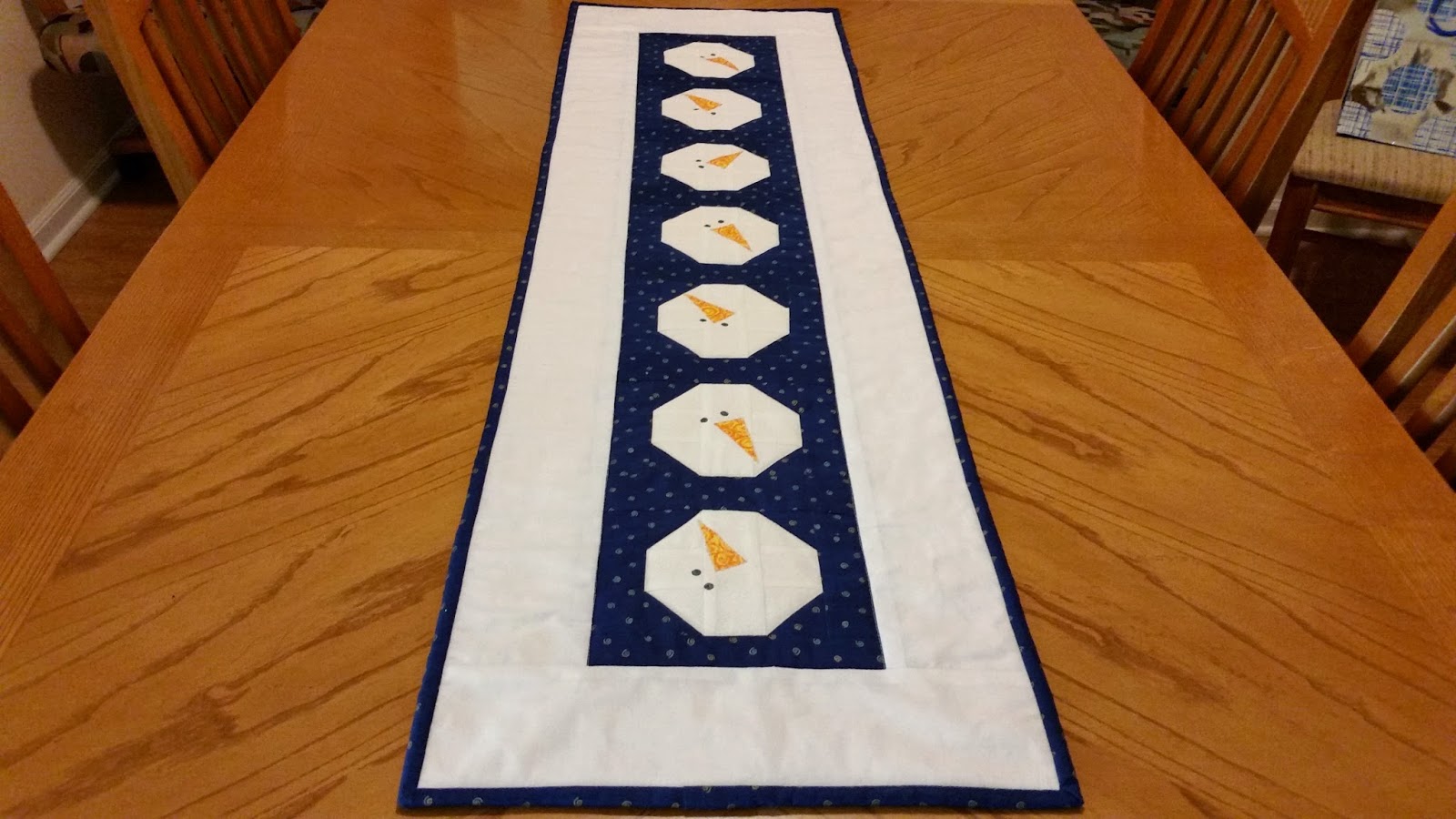 My long time friend B and I both have our birthdays in December  and we are both generally into making our gifts for B'day and Christmas exchange. 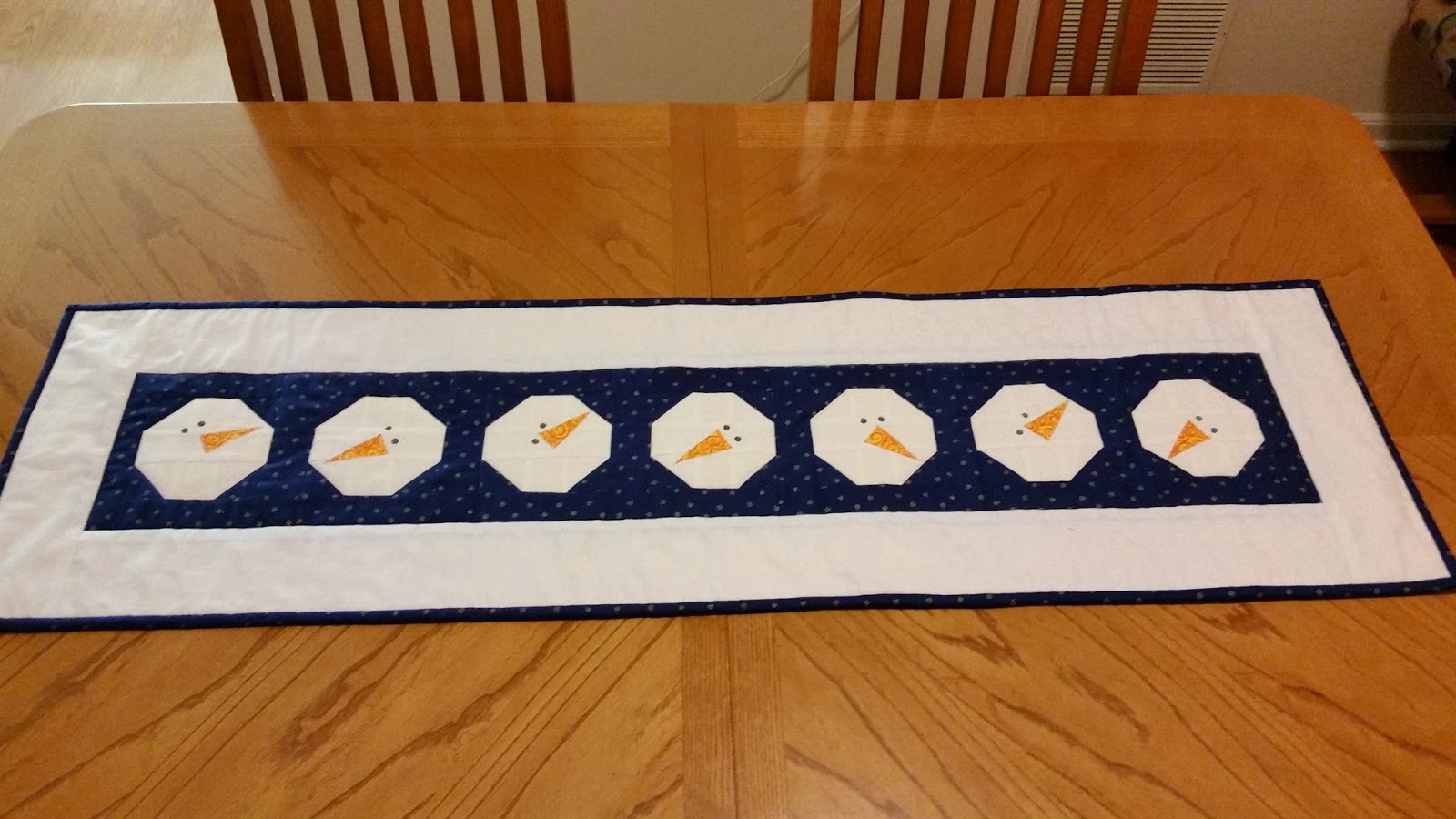 This wonderful table runner is the end result of me signing up for more than I could handle.  This is the first row of the 2014 BOM from Cindy at Quilt Doodle Doodles. 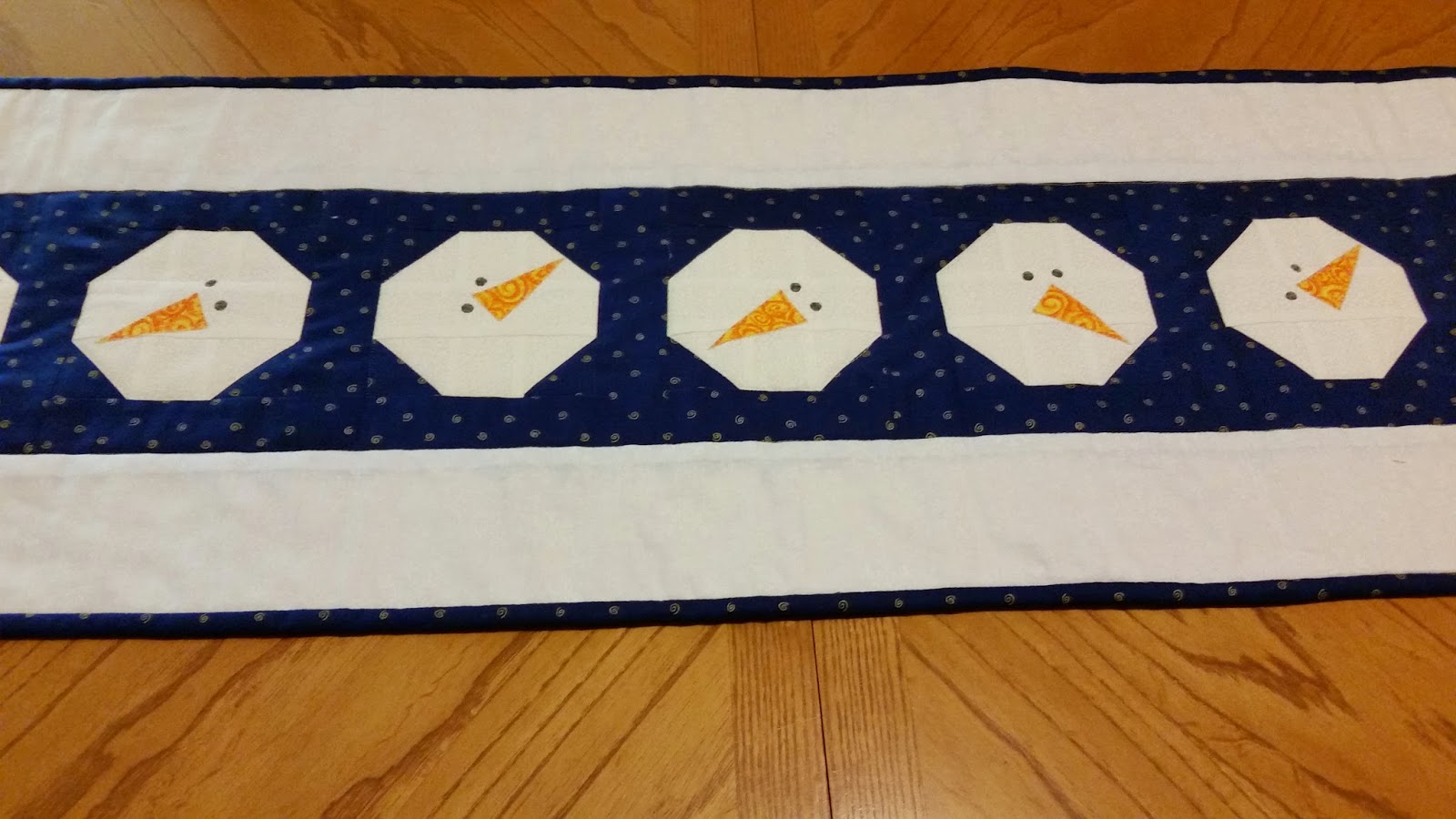 I got 2 months in and life got in the way.  So I turned the great row into an even greater Table Runner. I had it all done except for the quilting and binding months ago. All done now. 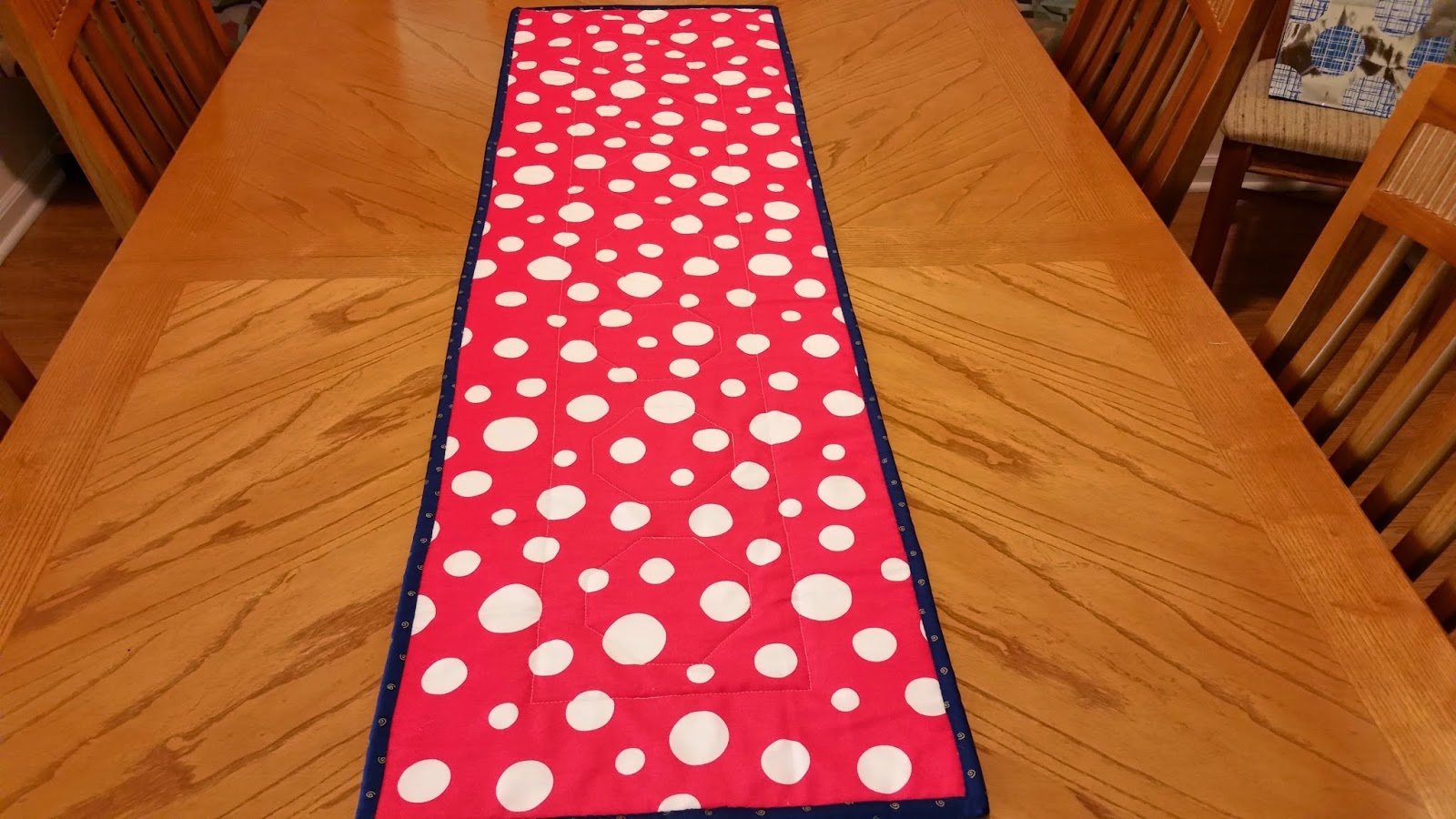 This is the back.  It would work for a summer runner this side up. 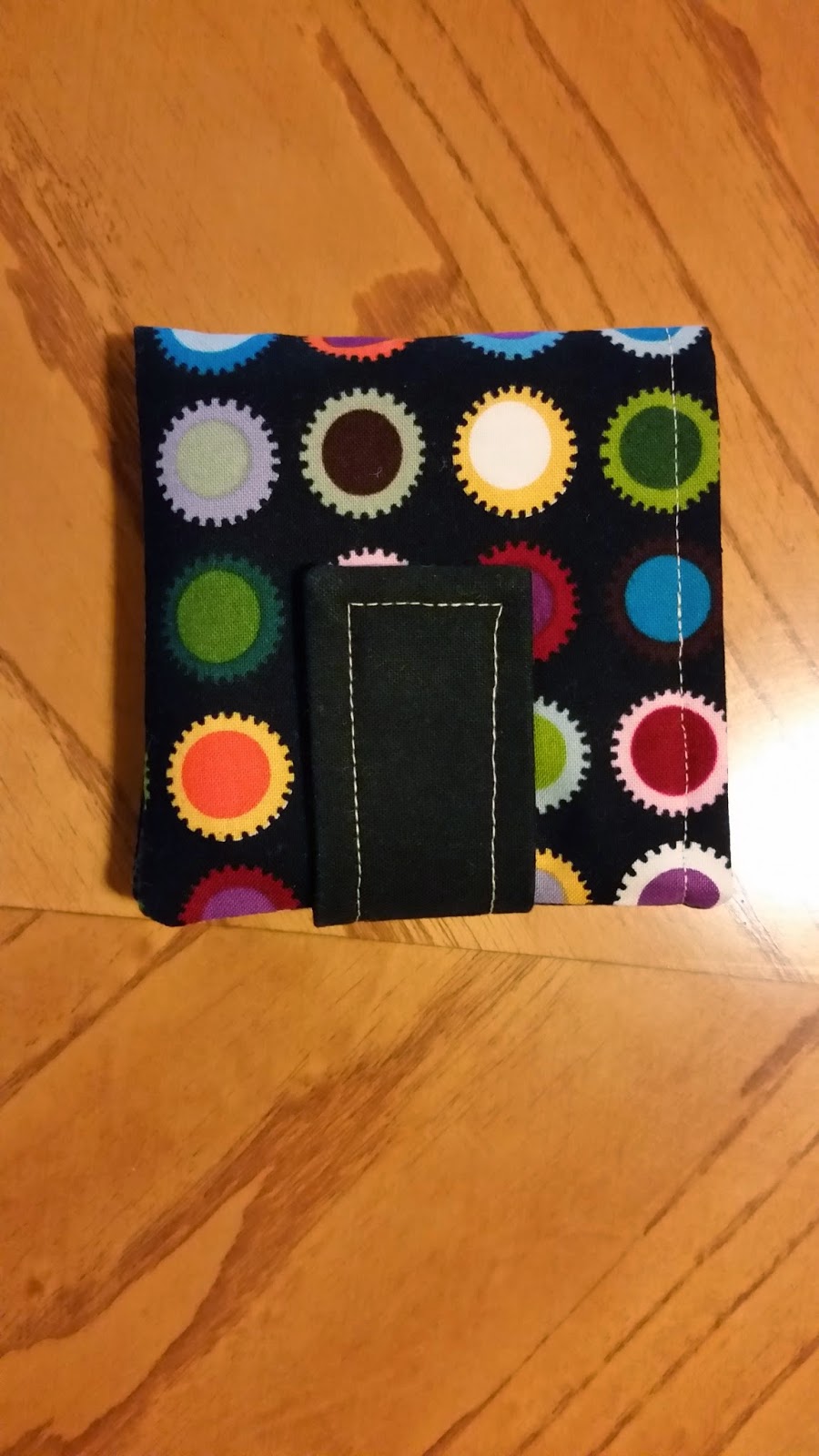 This little credit/gift card holder  was made from a tutorial by Jodell at http://modestmaven.blogspot.com/2012/02/bi-fold-wallet-tutorial.html 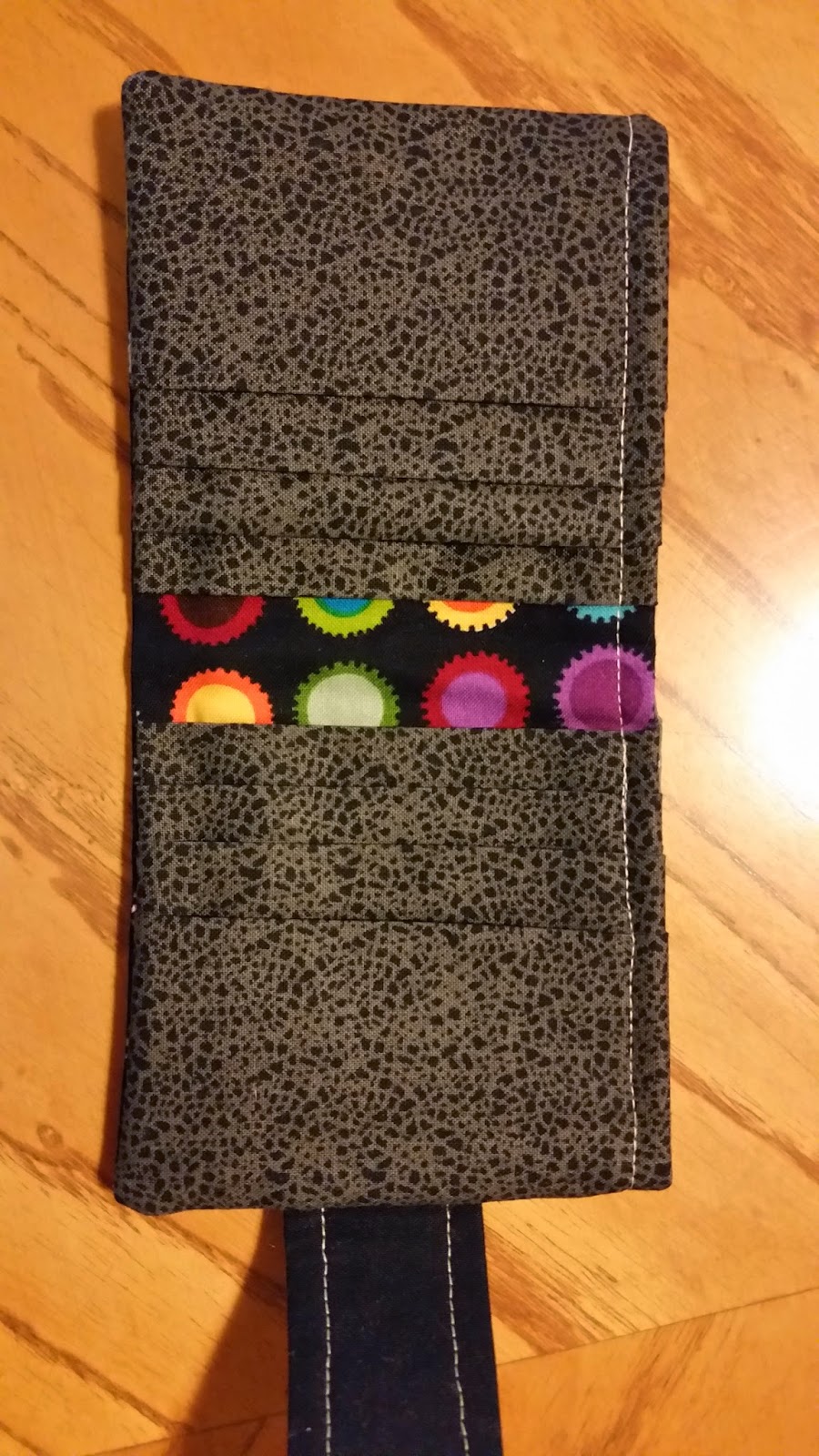 The design is set so the cards slide to the middle and not the top.  Making is less likely they will fall out of the wallet.

It was a great tutorial to follow. Once I picked out the fabric I'm thinking it took under an hour and a half to complete. 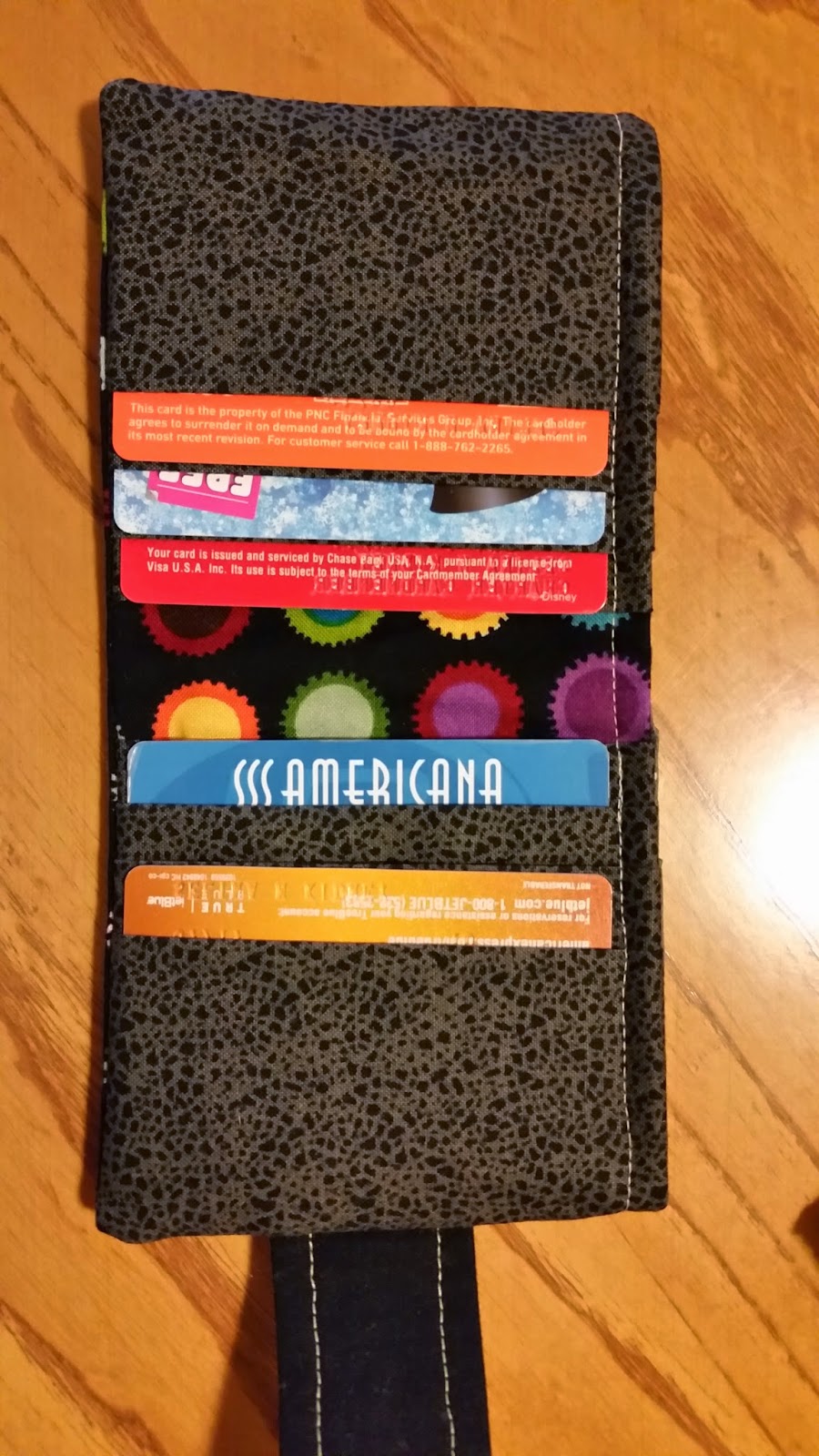 It's the B'day part of B's gift.  It will only have the DD gift card in it when she receives it.  The rest are there for the photo only.   I am making a second one just a tiny bit larger for myself.  I must take a bit more in my seam allowances then called for.  My cards all fit but snuggly, which may be for the better. 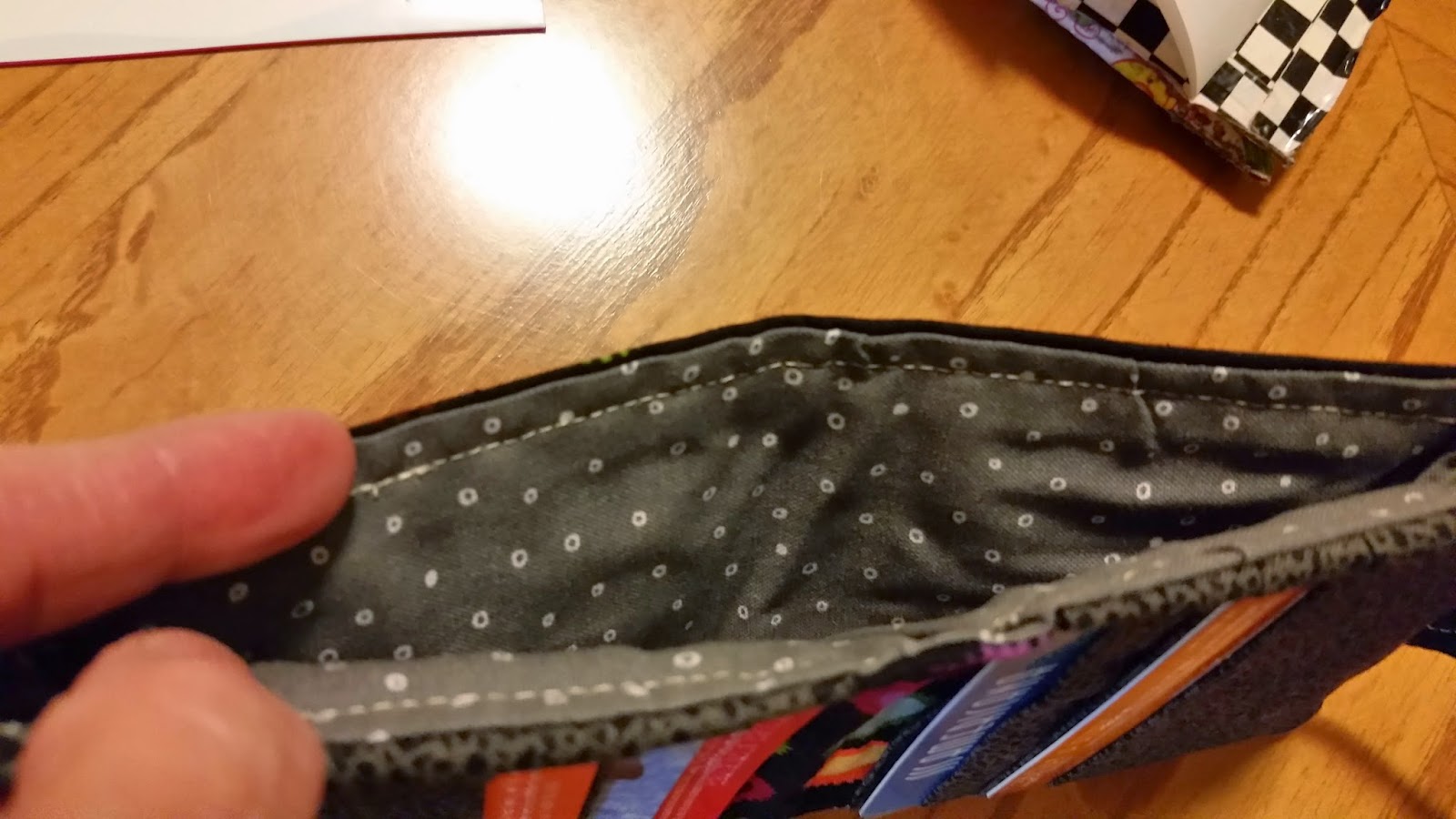 Least I forget there is all a space to hold your green money.

In the mean time I have been working on my cross stitch for the next blog hop, Tammy for All Seasons. 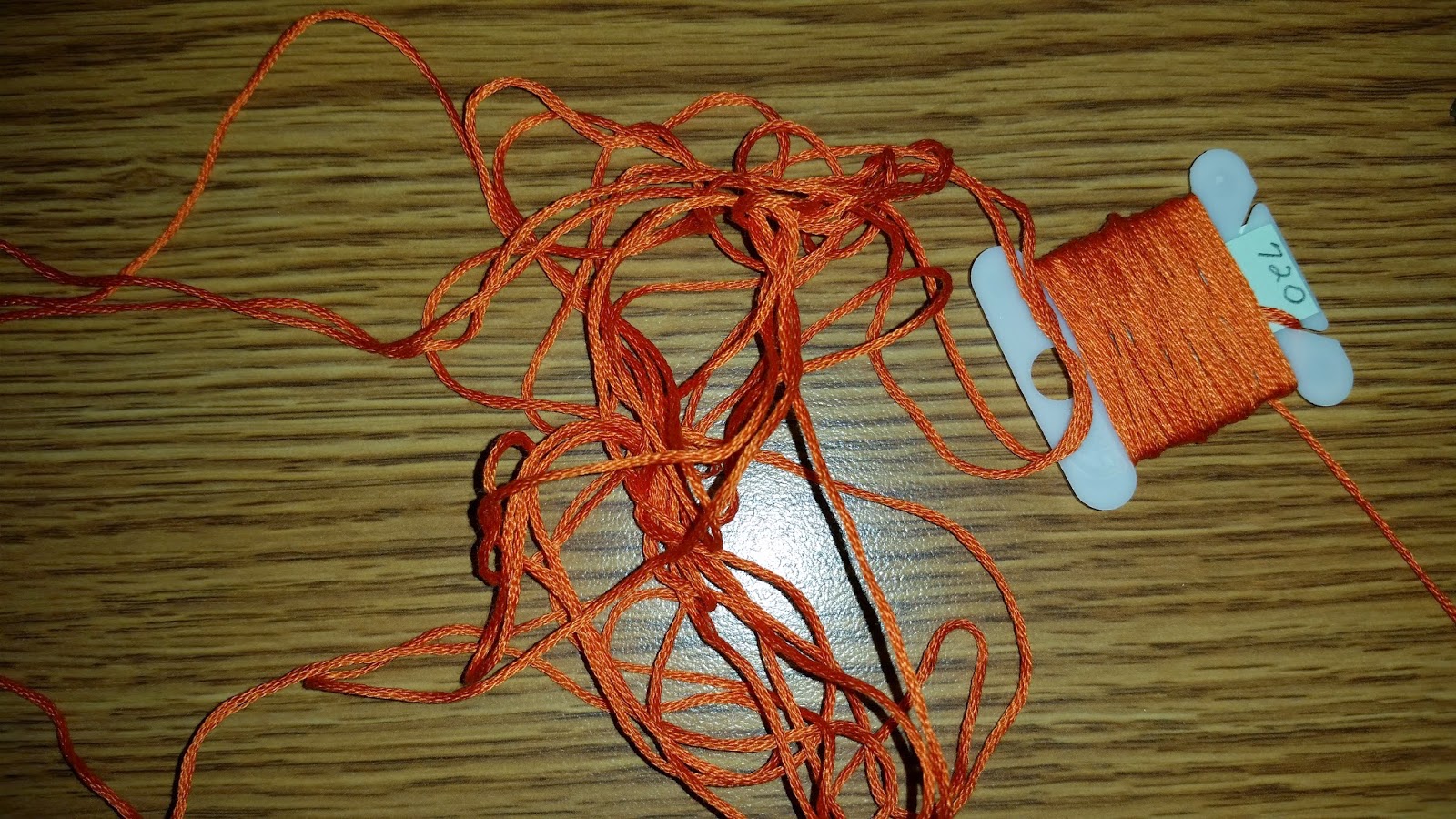 I'm really out of practice.  It's been close to 20 years since I did any cross stitch. I also have been fighting a wicked cold for just over 2 weeks which hasn't helped with the focus necessary. 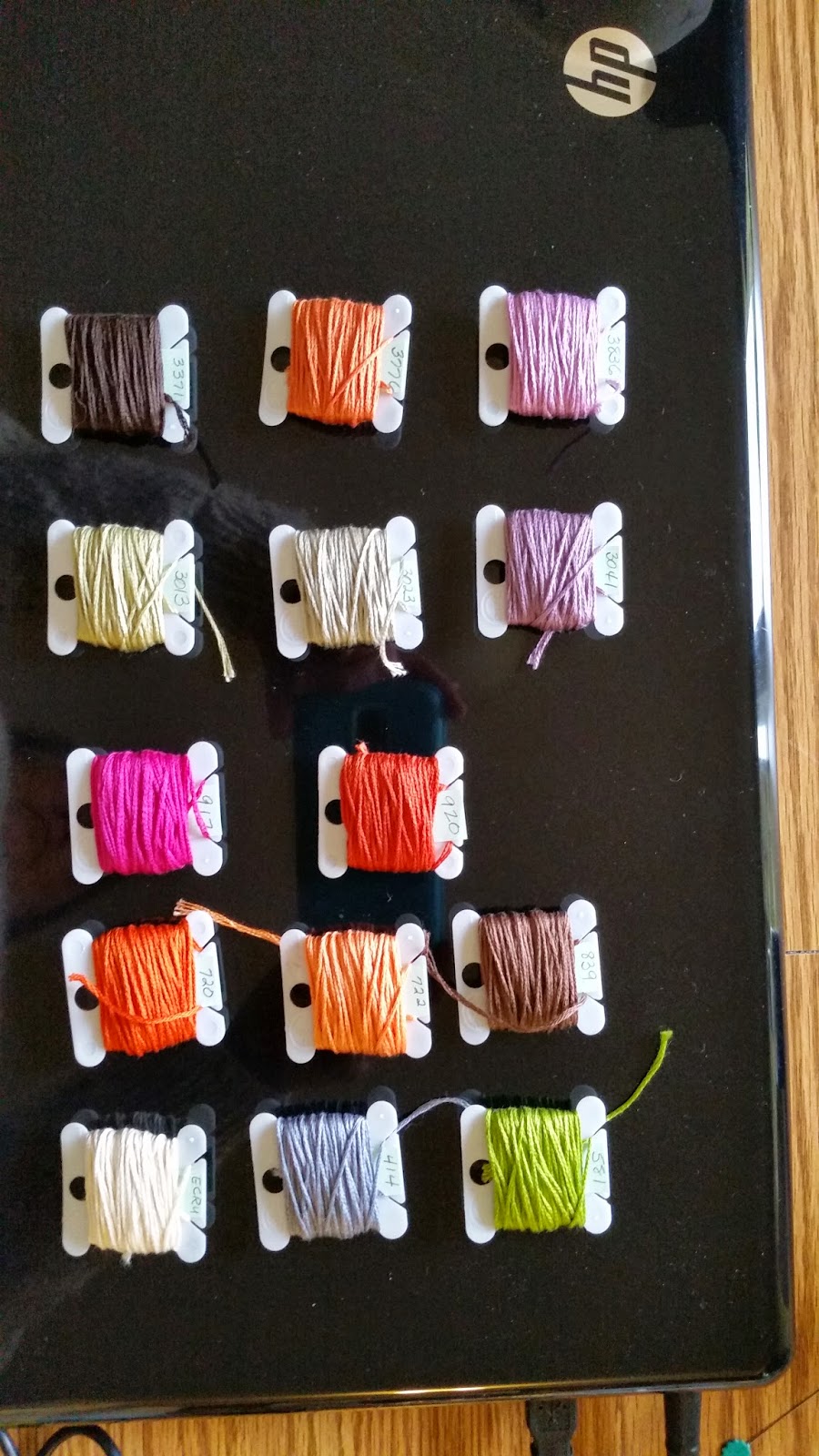 I did get my threads wound and organized. 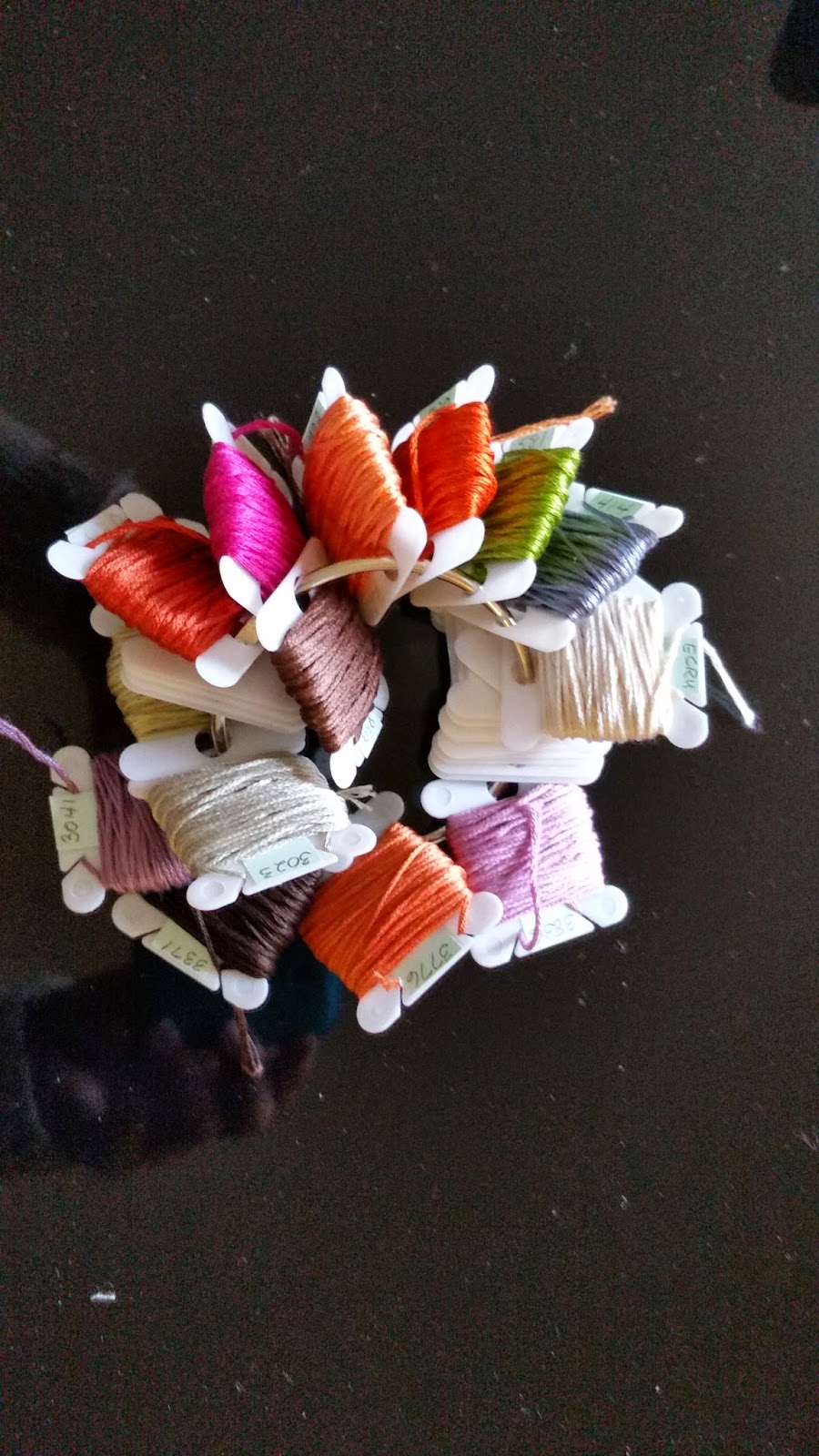 I've even managed to get most of the cross stitch done, maybe not exactly perfect but way better than I had hoped for.  The big reveal is in a couple of weeks. Stay tuned.